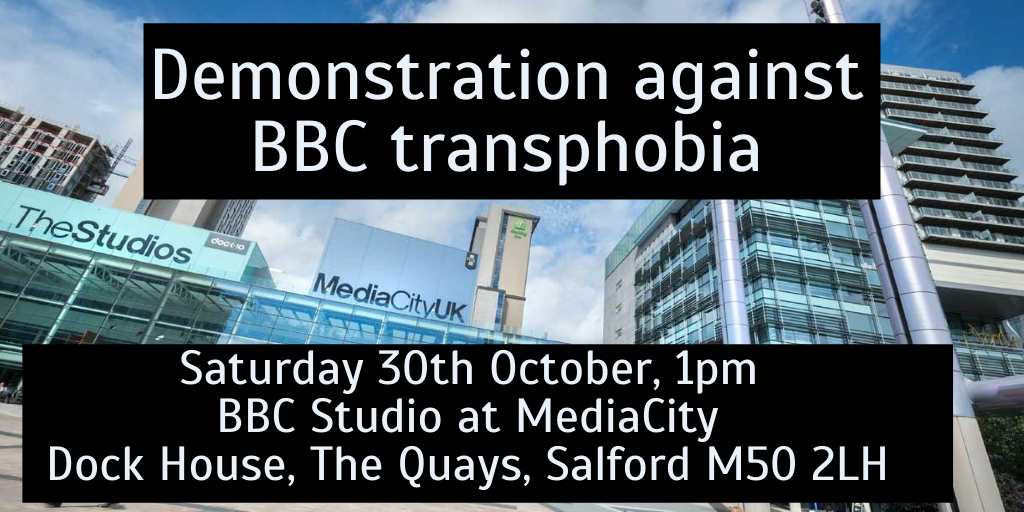 In response to todays BBC News article which implied that Lesbian, Bisexual and Pansexual transgender women were a threat to cisgender Lesbians, a protest has been scheduled to take place this Saturday at 1pm outside the BBC’s headquarters in Manchester.

The BBC has today been heavily condemned by transgender people and trans allies as well as the wider LGBT+ community. An open letter devised by the group Trans Activism UK has gained 3,674 since 7pm this evening and is gaining new signers as I write this.

According to one of the organisers (who chose to remain anonymous) the protest is also a response to the BBC’s recent coverage of Stonewall, who were the subject of a 10 part BBC Sounds podcast series that criticised the charity for their perceived influence and support of transgender equality.

“We just decided to organise something because it didn’t seem like anyone else was. The BBC News Article was certainly the trigger, although to be honest the BBC’s coverage of trans people has been dreadful Including the recent attacks on Stonewall” one of the organisers told us.

“The article today was not journalism, it was an anti-trans propaganda hit piece. And this kind of gutter journalism has real life effects. It has a direct impact on the lives of trans people.”

“Although the anti-trans activists have a huge platform, both online and through the media, in reality they’re a small, albeit very loud, minority so the aim really is to show that the majority of people support transgender folk, and we don’t think it’s okay for our public service broadcaster to publish such attacks under the guise of journalism”

The BBC has been increasingly criticised for the decisions they have made when it comes to reporting on trans issues. BBC News has an extensive history of platforming anti-trans groups including the LGB Alliance. This has resulted in accusations of transphobia as well as pushback from the wider LGBT+ community including a petition that gained nearly 40,000 signatories.

When asked what the goal of their protest is, the organisers of Saturdays protest told us: “We want to send out a clear message to the BBC that they can’t get away with publishing poorly researched transphobic nonsense.”

The protest will take place at 1pm this Saturday, outside BBC Studios at Media City in Manchester.