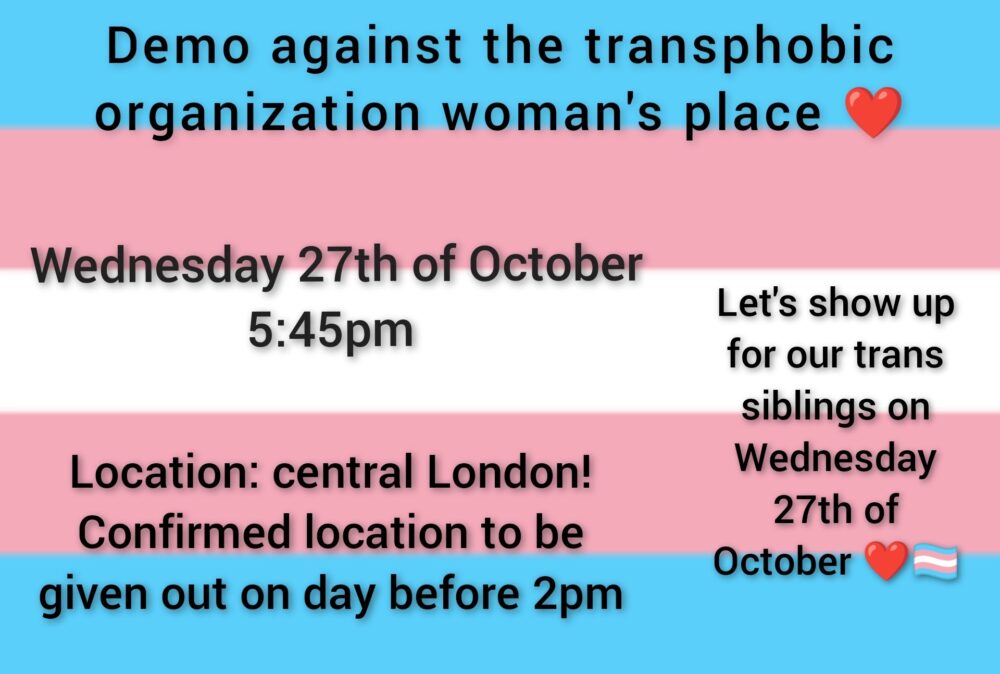 Trans people and allies who are able to travel to central London are being called on to protest the latest public meeting held by transphobic ‘feminist’ group Women’s Place UK.

The group regularly argues for the exclusion of transgender people, specifically those assigned male at birth, from certain public facilities and spaces. Women’s Place UK’s co-founder Judith Green has previously given oral evidence to the Women & Equalities select committee where she argued against trans inclusion in specific public facilities.

(It’s important to remember: this is not unusual for a parliamentary inquiry and a great many trans people and allies gave evidence also including Stonewall CEO Nancy Kelley, GIRES chair Nancy Burton, Mermaid’s Luis Asquith and Dr Jane Hamlin from the Beaumont society.)

The meeting, titled “A woman’s place is not prison”, will feature several academics in the area of criminology, as well as Labour MP Rosie Duffield and chaired by Allison Bailey. Bailey and Duffield were last seen speaking at the recent LGB Alliance conference in central London last week.

The location of Women’s Place UK meetings are not revealed to attendees until the afternoon of the event. We will update this story once the location of the meeting has been announced. The protest is scheduled to begin at 5:45pm in central London.

UPDATE: The location of the protest has been announced as the Queen Elizabeth II centre in central London. This is the same venue that recently hosted the LGB ALliance conference last week and has previously hosted Women’s Place UK in 2019.

An organiser of the protest had this to say:

“So we as trans people and trans allies will be gathering outside the current undisclosed location of the women’s place conference on Wednesday the 27th of October in a world currently swarmed in the unfortunate and constant proposal that the reason misogyny exists is a direct result of the trans experience and existence!

“We say no ! We say focus on the real causes of misogyny that we do, as a collective, need to tackle rather than brainstorming ideas and calls for action to dehumanize me and my trans siblings.

“We are out in the streets as we have seen time and time again this action works !

“Trans women especially deal with the trans extremes of transphobia and misogyny! We should be talking about how we eradicate misogyny together! Not over a divided court of hate.

“Trans exclusionary folk like Rosie Duffield and Joanna cherry simply have nothing better to do than spout hate in their false cause for ” women’s liberation” attacking others and encouraging hate crimes towards minorities gets you nowhere! In fact, it pushes you backwards.”