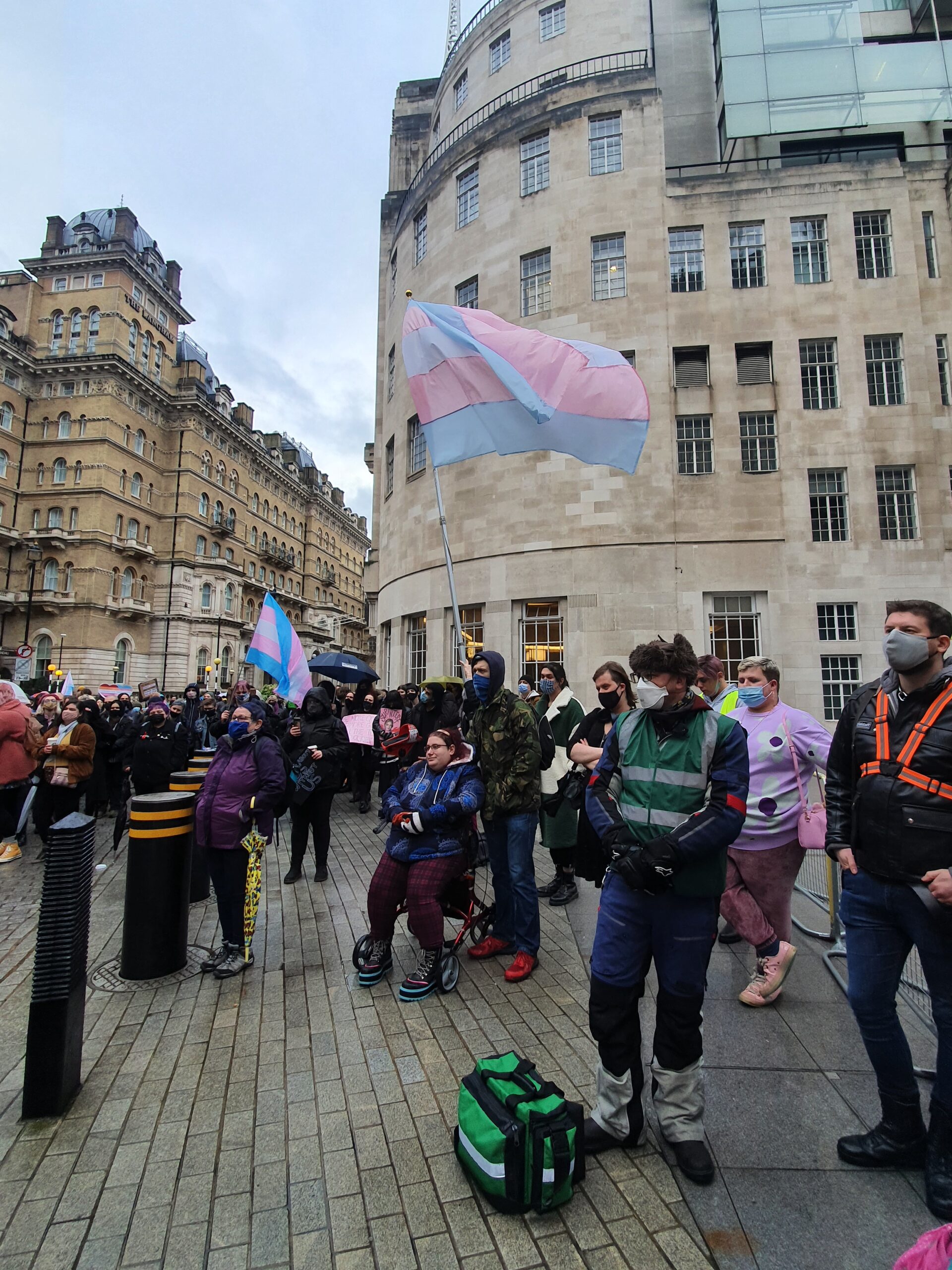 So BBC News did an article and then it all kicked off.

Nearly 3 months ago, the BBC put out an article that essentially painted lesbian transgender women as rapists. There is no two ways about it, look at it’s title:

The details of this are well known in the community now so there is very little reason to go over them again (although if you need catching up the article has its own Wikipedia page now).

The response from the community was massive. I myself travelled the length and breadth of the country to cover the protests where I saw hundreds of trans people and our allies railing against the BBC’s transphobia. I had never seen the community unite in protest like this before.

One of the reasons why this response was so much larger than usual? The work of Trans Activism UK, a grassroots group of activists with a solid history of organizing large protests in London. They put together an open letter to the BBC that got 20,000 signitures in a few days (you can read it here) as well as pushing out advice on how to make a formal complaint to the BBC.

After months of relative inaction by the BBC, Trans Activism UK held a protest outside the BBC’s headquarters in central London.

Reports from the day say ‘hundreds’ of people attended. Even though the article that ignited the anger in our community was published months ago (the equivalent of 72 years in news-cycle time), it was very clear that the community still feels that the BBC have not done enough (or anything at all) to make things right with our community.

The selected speakers represented a wide range of voices from our community but many made the point that the BBC’s targeting of the trans community isn’t entirely unique. Trans Activism UK’s own Shaira Choudrey (she/they) had this to say:

Hafsa Qureshi (any pronouns) went even further when noting how the media has portrayed Muslims as well as trans people:

“Malcolm X once said that the media is the most powerful entity on earth. They have the power to make the innocent guilty and to make the guilty innocent and that’s power because they control the minds of the masses. For a long time the media helped perpetuate the myth that white people were superior to people of colour through genetics, phrenology, whatever else was the racist ideal of the day. Only now it’s not socially acceptable to say out loud so they perpetuate stereotypes. I am a terrorist because I am a Muslim. Accusations of paedophilia simply because we are trans. This is rhetoric that we hear constantly and we shouldn’t have to be exposed to this but hearing this seep in from all around you, that’s absolutely telling the masses that we are all equal but some are just more equal than others”

You can watch all the speeches from the day in the below playlist put together by Trans Activism UK. You should also follow them on Facebook and Twitter to keep up to date on what they are cooking up next.

London was not the only place to see protests against the BBC from the community. A smaller protest also took place in Manchester outside the BBC Manchester’s headquarters.

Three days after the protests the Guardian reported that the BBC’s director of editorial policy David Jordan had said that:

“We are very committed to ensuring that viewpoints are heard from all different sorts of perspectives and we don’t subscribe to the ‘cancel culture’ that some groups would put forward.”

He then went on to say:

“Flat-earthers are not going to get as much space as people who believe the Earth is round, but very occasionally it might be appropriate to interview a flat-earther. And if a lot of people believed in flat Earth we’d need to address it more.”

Clearly this was a sign that the upper management of the BBC were not going to take seriously the concerns of the trans community. Trans Activism UK’s own Laura Kate Dale did not mince her words on how she felt upon seeing Jordan’s words.

It is safe to say that there is more work that needs to be done. But what may complicate things is that, since the protests the future of the whole BBC is now in question after Culture Secretary Nadine Dorries announced that BBC funding will be slashed and implied that the TV license itself may become a thing of the past by 2027.

One thing that is for sure. If the BBC is facing an existential threat from the government, it is unlikely that trans people will be interested in standing up for it when it is clear that the BBC has no intention of doing the same for us.